"To one whose mind is free, there is something even more intolerable in the suffering of animals than in the sufferings of humans. For with the latter, it is at least admitted that suffering is evil and that the person who causes it is a criminal. But thousands of animals are uselessly butchered every day without a shadow of remorse. If any person were to refer to it, they would be thought ridiculous. And that is the unpardonable crime. That alone is the justification of all that humans may suffer. It cries vengeance upon all the human race. If God exists and tolerates it, it cries vengeance upon God." Jean Christophe.
1 comment:

I should point out that the below again are just allegations. Lollar chose to sue and get an injunction against Mary for posting what Mary regarded as proof of Lollar breaking the law. Now Lollar is equally guilty of posting what I regard as libelous stuff against Mary.  --Ed
UPDATE -  The truth about the episiotomy:
Amanda Lollar has worked and trained under the direction of a veterinarian for over 20 years. She has developed many life-saving procedures for insectivorous bats over the past two decades.


Mary Cummins filmed the episiotomy while attending her internship at Bat World sanctuary, and even helped during the procedure. Her voice can be heard offering to assist with the lighting, as well as my voice addressing her. She also took photos after the procedure. What Ms. Cummins failed to explain is that the bat had a pup stuck in her birth canal, likely for several hours. Waiting would have caused the death of the mother, an agonizing death at that. There was no vet available, and most veterinarians don’t do procedures on bats at 11pm anyway. I have preformed this procedure numerous time to save the life of the mother, as we have a wild sanctuary which is home to 30,000 bats as well as a nursery colony. I rescue mothers in trouble every summer.
Cetacaine is used to anesthetize the vaginal area before an incision is made – that is what is being applied with the cotton swab. As with humans, general anesthesia is not used for an episiotomy (which is not considered actually surgery). The pup was stillborn, likely from being stuck in the birth canal for so long. After the pup was discovered dead, the mother was placed under general anesthesia so she could be cleaned up and the incisions closed with surgical glue. The mother fully recovered and was later released.
Mary Cummins has made false complaints about us to Texas Parks and Wildlife, the USDA, the Texas Veterinary Medical Board, the Texas Department of Health, USFWS,  the Mineral Wells Department of Health, the City Manager, the Fire Marshal, Code Enforcement, the Chief of Police and we suspect the IRS. Each and every one of the officials who investigated her complaints found them to be without merit, some even called and offered their help in fighting Ms. Cummins. Mary Cummins has also sent numerous false and damaging emails to the large majority of our supporters, who in turn forwarded her emails back to us in support.
An injunction was scheduled on May 4th, 2011, to force Mary Cummins to remove the defamatory statements she has made about Bat World Sanctuary and Amanda Lollar from the internet. Approximately three days before the injunction, numerous new pages containing false and damaging statements appeared on dozens of internet sites, including facebook, indybay, twitter, myspace, care2 and more. Copyrighted videos from Amanda Lollar’s most recent book were illegally downloaded and altered in an attempt to display cruelty, then uploaded to youtube. Other recent defamatory items include photos Mary Cummins took without permission while interning at Bat World Sanctuary.
1 comment:

Ady Gil put it up in his site. He posted this on his wall.
Amanda Lollar of Bat World Sanctuary performed surgery on this bat. The bat had no pain relief. Lollar is not a veterinarian. She accidentally cut the bat's vagina too deeply. Then she yanked the baby out. She accidentally yanked the umbilicus out. Then the bat's vagina and uterus prolapsed. The bat later died. Baby was born dead but was pink which means he'd just died
The Video, "AmandaLollarBatWorldSanctuary.mp4"
can be downloaded from:
https://public.me.com/adygil
Please, politely email the regulatory agencies who are investigating this animal cruelty. Tell them you want her prosecuted to the full extent of the law. There is another video of her yanking the molars out of a bat with no pain relief. The bat is seen kicking and fighting her then bleeding. This woman should not be operating on bats. Thanks.
wpoffice@tpwd.state.tx.us, robert.m.gibbens@usda.gov, policechief@mineralwellstx.gov
2 comments:

Videos and photos (see links below) have surfaced of Amanda Lollar performing illegal surgery on conscious bats. The bats can be seen kicking and trying to bite her. In one video she performs an episiotomy on a bat. Lollar accidentally pulls out the bat's vagina and uterus because she cut too much. The bat passes out in shock. She later dies along with her baby. Let authorities know you want Lollar prosecuted for animal cruelty and abuse. 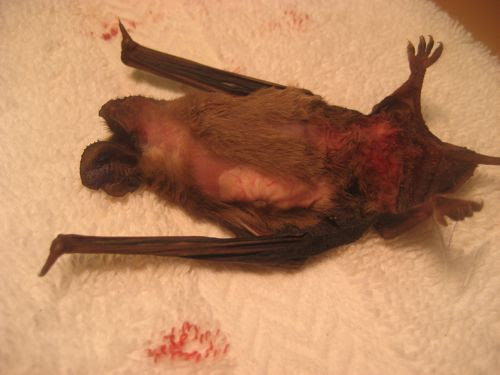 Amanda Lollar is a "wildlife rehabilitator" who treats bats in Mineral Wells, Texas. She is not a veterinarian yet she illegally performs surgery. She illegally possesses and uses controlled substances such as Isoflurane. Her illegal acts were reported to the Texas Veterinary Board. They stated, "she committed animal cruelty and should be reported to the police."

Amanda Lollar purchases, possesses, and administers rabies vaccinations to bats. Only veterinarians may possess and administer rabies vaccinations to animals because they can cause an animal to die if not administered properly. Lollar does not report rabid bats to the Texas Health Department. Instead, she euthanizes them illegally with controlled substances, then dumps their bodies into the regular trash. Her illegal acts were reported to the Texas Health Department. They stated that "her acts are criminal and should be reported to the police."

Texas Parks & Recreation was contacted about Amanda Lollar's illegal activity as they control her wildlife rehabilitation permit. They stated, "wildlife rehabilitators cannot perform surgery, and they cannot have controlled substances." The USDA was also contacted because Lollar has a USDA exhibitor permit to exhibit her bats. Lollar violated the Animal Welfare Act by "not providing proper veterinary care." Texas Parks & Recreation and the USDA are currently investigating Amanda Lollar and Bat World Sanctuary.

In another video, Amanda Lollar can be seen using forceps to pull out the teeth of a conscious bat. The bat is clearly kicking and trying to bite Lollar. After Lollar yanks two of his teeth out the bat can be seen bleeding. Lollar uses this video as an example of "proper" dental surgery in her website http://www.batworld.org .

Video of Amanda Lollar pulling out the teeth of a conscious bat. GRAPHIC!!!
http://www.youtube.com/watch?v=g_GN16jtbiU

A visitor to the sanctuary last year found a one-winged dead bat under Amanda Lollar's desk. It had been dead for at least two days as insects were eating it. It appeared to have died from lack of food and water. When Lollar was shown the dead bat she said the bat "was one of my favorite bats." She obviously cannot care for the bats she has if her favorite bat could go missing for days and not be noticed.

The visitor also noted that Lollar has seven dogs even though she has no kennel permit. They are all debarked. Some of the dogs have medical and dental issues, as well as very long nails. They are never walked. One of the dogs cannot use its rear legs, so she's forced to drag herself around. Lollar's outdoor cats also need veterinary care as they appear to have fleas, worms, and dental issues.

A licensed veterinarian saw the videos and stated, "This is a nightmare! No one but a veterinarian should perform surgery. Report her to the state veterinary board. She should go to jail." A viewer of the episiotomy video stated, "That is horrific! They should arrest her immediately. She pulled out her vagina! She should never be allowed around animals ever again because she has a complete disregard for their feelings of pain."

It should be noted that Lollar used photos from this bat's botched episiotomy in her website and book to show "proper episiotomy procedures." What she claims happened in her book is not what happened in real life as evidenced by the video.

These violations were reported to the police as instructed by the Texas Health Department and Texas Veterinary Board. Make sure the Mineral Wells Police Department thoroughly investigates these acts of animal cruelty and abuse. Please, politely ask the Chief of Police Mike McAllester to take necessary action, policechief [at] mineralwellstx.gov. Also ask the USDA Robert.M.Gibbens [at] usda.gov and Texas Parks & Wildlife wpoffice [at] tpwd.state.tx.us to revoke Lollar's USDA and wildlife rehabilitation permits.

Video of Amanda Lollar holding a rabid bat in her hand without gloves. Afterwards she illegally euthanized it with Isoflurane pictured in the background then she dumped it in the regular trash
http://www.youtube.com/watch?v=zagiiJwFPaQ
6 comments: