Ed Boks resigned as of April 1, 2009. What has happened during the next year compared to the two years before he retired?
Below is a chart specifically for cats, leaving out LAAS stats with regard to dogs and other animals. This is because I don't have time to do all the charts, and I think cats have always gotten a raw deal. Look at Longcore and the plight of TNR.


These stats are compiled from Animal Services own statistics: http://laanimalservices.org/PDF/reports/CatIntakeNOutcomes.pdf


However, during this past year since Boks left, things got even worse percentage wise, even though the number of cats impounded decreased by about 1,500.


That is, despite a couple of good months, over all, things have gotten considerably worse over the past two years.

Since Kathy Davis stated budget cuts could increased the kill rate by 50% during this upcoming year, we are seeing the total unraveling of Animal Services during a three year stretch.

Therefore, the pie chart for cats will look like the following at the end of June, 2011: 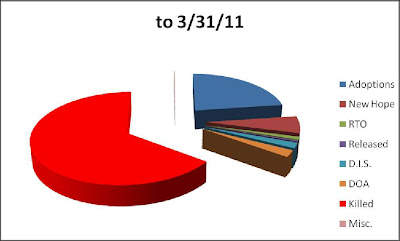 Response from a City Hall staffer:
Ed, this is way too myopic an analysis to be useful in any practical sense. It ignores a variety of factors and realities in favor of a strict numerical analysis that easily lives up to the old adage of being "unable to see the forest for the trees."  Over the period of time you describe as "a total unraveling," the department has been improving its operation in a number of very important ways, laying the groundwork for a better-managed and more functional department going forward under the next GM.  No one is happy with the statistical downturn, but it has substantially leveled off since last fall and, as even you note, occasionally improved in the short term.  And we categorically reject the assertions of certain people that the national and local economies play no role in the direction things have gone.  You can't spend time in a shelter and watch a stream of harried people trying to figure out how to feed, clothe and house themselves and their families come in to relinquish their animals and continue to deny the relevance of economic factors.  At the same time, it's obvious that there needs to be more spay/neuter penetration into communities where "bully breeds" are continuing to proliferate, leading to a steady stream of impounds of those kinds of dogs that undermines the heroic efforts of rescuers and laudable shelter adoption rates.  Such efforts are in the planning stages as I write.  Which leaves the cats.No one disagrees that cats are getting a raw deal, no thanks to the TNR problem  and the unfortunate reality that not as many of them get adopted as dogs. If someone would like to establish the world's largest cattery and neonatal nursery operation ever so we could place thousands of them in a situation where they could stay until homes were found for them (or perhaps for the rest of their lives if necessary), perhaps the problem could be abated somewhat.  Absent that, we're pushing to move the TNR situation toward a resolution.  But even once a more aggressive TNR effort can be supported by the department, I think only a cockeyed optimist would expect there to be some dramatic change in the statistics in any immediate sense.   The most ardent, professionally credible so-called no-kill practitioner interviewed for the GM job freely volunteered that it would probably take at least three years to register a notable improvement in the numbers to the point where the advocates might finally start to find a comfort level.  In the meantime, a lot more animals than any of us would prefer would probably be euthanized and those of you who focus so intensely on statistics would remain quite unhappy.If that's the best-case scenario we can hope for as described by someone who basically adheres to the "no kill equation," I would suggest that you are not following a useful path by circulating a narrow-focus analysis like the one contained below.  Where is it supposed to lead us?   We already know we're not doing as well as we, or anyone, would like, and we see the numbers every week.   But nothing's unraveling.  In fact, the department is just finishing what has actually been a pretty decent year by LAAS standards, with no major calamities, and the next GM (who is near to being named) will find there's a much more solid foundation to build upon than the critics are willing to admit.  And, as always, the hard work will continue.

“Three years to register a notable improvement in the numbers to the point where the advocates might finally start to find a comfort level”?

On the one hand, I don’t doubt it—after all, we didn’t get into this mess overnight. At the same time, I still find it inexcusable. Then again, I think we have something like a social contract with companion animals—that we owe them, by the very fact of domestication, a good deal more than we, as a society, tend to deliver.

P.S. “No major calamities?” Tell that to all the dead cats and dogs.