By Kevin Iole, Yahoo! Sports4 hours, 48 minutes ago
HENDERSON, Nev. – The hands that once caused so much fear, that once scrambled the brains of highly trained men, which caused elite professionals to cower in fear, now gently, tenderly, caress a pigeon.
Mike Tyson, former heavyweight champion of the world, the one-time baddest man on the planet, is now just a working stiff who hustles odd jobs to make a living.
Life is simpler now, more peaceful. He’s doing what he loves, surrounded by people and things he loves. The zany, out-of-control fighter, who once gnawed an opponent’s ear off, who bit another opponent on the leg during a news conference, who said he wanted to eat an opponent’s children, is long gone.
More From Kevin Iole 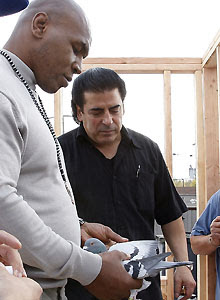