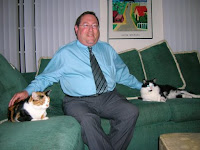 The LA Times did not endorse Paul Koretz saying LA needed new thinking and that Paul was part of the old establishment. But he has tons of endorsements from Democrats you can trust and is--as the photo shows--a cat person. He has a good, good shot and is highly commended by our own Rich McClellan. Unfortunately, what he says below doesn't have much meat. (Soy?) He either hasn't studied the issue, or he doesn't have any answers. This is disappointing. Yet, I believe him that after he hears many options over a period of a year or so he will whole heartedly back one, but it doesn't sound like he'll buck the Mayor on this one.

In the wake of my recent interview with David Vahedi, candidate for L.A. City Council, seeking his opinions on various key issues in the animal care community, I was contacted by Rich McClellan, head of the California chapter of the League of Humane Voters, to ask why I hadn’t interviewed Paul Koretz, also a candidate in the 5th, whom the League has endorsed in this race. I was happy to do so.

I asked Mr. Koretz the same questions I asked Mr. Vahedi, so that animal lovers in the Fifth District, and throughout the city, can have the opportunity to get to know the candidates, see what they have to say about the various animal-related issues and controversies that face our city – and to hold them accountable for their answers when and if either are successful in their bid for the Fifth District Council seat.

Kate Woodviolet: Why do you make it a point to talk about animal issues?

Paul Koretz: Animals have always been treasured members of the families of many of my constituents, as well as my own. The empathy for animals in this district reflects and is a part of its concerns for many other social justice issues. I take strength from the degree to which animal issues invite participation by the people of this district in making Los Angeles a better place. There also has always been a special place in my heart for wildlife, especially endangered species.

KW: What, in your opinion, are the main problems facing animals in Los Angeles?

PK: As long as there have been politicians there have been more problems then there are good ideas or the resources for dealing with them. I turn to the community most concerned with our current problems to help me decide priorities.

Legitimate concern about the need to confine certain species of animals in a zoo, in spite of the cost, when more economical and effective ways of educating and awakening people to the wonder of animals exist seems to be an issue that resonates with animal lovers and fiscal conservatives alike. Should we be imprisoning elephants at a cost of millions of dollars when private sanctuaries exist that are willing to take them?

The fact that elected representatives continue to fund the maintenance of pet overpopulation in this city rather than create and enforce laws that will truly control this problem is one of the most fiscally irresponsible and inhumane situations that LA continues to maintain. It is obvious that new leadership is needed in the department of animal services.

KW: L.A. has two distinct animal care and control entities: L.A. Animal Services for the city, and the L.A. County Department of Animal Care and Control, for county and unincorporated areas, which is responsible for animal control in such Westside areas as Culver City.

Both departments have experienced their share of controversy, including a recent petition of no confidence against Ed Boks, general manager of LAAS, which was signed by over fifty percent of LAAS workers; and multiple lawsuits against LACDACC and its Director Marcia Mayeda.

What, in your opinion, are the most pressing issues that need to be resolved, both with LAAS and LACDACC?

PK: Los Angeles County is the responsibility of the County Supervisors. There are ideas that could improve conditions in the County Shelter System, but since we have no direct control I would focus on the City.

The problems in the City Shelters appear to be those of leadership, creativity and policy. I certainly believe that the highly motivated members of the humane community in this city should have a much greater voice in creating and implementing policy. There is the power in this city to make animal services a private entity endowed by those concerned members of this city. There is the citizen interest to have large portions of the activities performed by volunteers at great savings to city. But not within the current environment of distrust between the citizens and the administration. My door will always be open to those of any interest group who want to improve the functioning of this city through ideas, innovation and participation. Together we can delineate problems and create solutions. City government and administration should not be at odds with its most concerned and active citizens.

Part 2: Koretz talks about pet limits, anti-Pit Bull legislation, whether elephants belong in zoos, and what members of the humane community must do to make their voices heard in City Hall

While I'll admit that Paul Koretz could give John Kerry a run for his money on politician-speak, he says a couple of things that I found surprising. First he, like Vahedi, flat-out calls for a change in leadership at LAAS, which is no biggie here, but is something I haven't seen anyone do in the L.A. Times. No doubt there are undercurrents and rumors, but for someone to say it in an official capacity, especially someone who's already an established politician in this town, I think is noteworthy.

Frankly, I was also impressed that he knew enough to call out the "environment of distrust" between LAAS workers and members of the rescue community. For a politician that's a fairly un-nuanced statement. Granted, from stories I see here and on Ryan Olshan's blog, the "environment of distrust" occasionally blossoms into an "environment of intimidation and assault," but you can hardly expect him to go that far. But it certainly sounds to me like Paul Koretz has listened to what non-department people have told him about LAAS, which suggests he's not like many other local politicians and their staffs, who automatically treat any member of the public as if he or she is both uninformed and of substandard intelligence.

Plus, big kudos to a man who says we're "imprisoning" elephants. That's not equivocating.

And his pro-animal legislative record is impressive, no doubt.

Anyway, keep an eye out for Part 2 of my article on Koretz.

I did not read what you read in what he said. You said he said, "not within the current environment of distrust between the citizens and the administration." That is different from what you explained.

Also, I have no idea what he means when he says, "The fact that elected representatives continue to fund the maintenance of pet overpopulation in this city rather than create and enforce laws that will truly control this problem is one of the most fiscally irresponsible and inhumane situations that LA continues to maintain."

Is he talking about the spay/neuter law, ending landlord discrimination against pet owners, lifting the 3 animal ban, or what? I have no idea and I think he is not even aware of what legislation he is talking about.

"It is obvious that new leadership is needed in the department of animal services."

Almost all councilmembers say this, but Villaraigosa stops them.

Really, I expected a better understanding of the issues or a less carefully crafted set of answers to you.

However, I urge everyone who lives in the Fifth District to vote for him.

Please remind people to Vote in March...Now is the chance to get Antonio OUT.