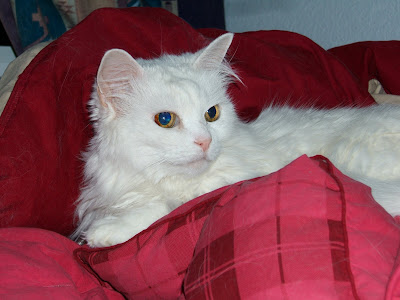 Click on photo to Enlarge
Many years ago when I lived in Santa Monica, I knew this very unique woman, Wilma Lusk.
Wilma worked as a receptionist for many years for Ken Jones. Wilma got to be a good friend of mine and taught me a lot about cats.
Wilma died in 1998 a few weeks after Christmas. Wilma's life revolved around cats and she would foster and place hundreds over the years. Kerima and I got 3 from Wilma, a Calico named Malita who died 4 years ago, Dustin, our cancer kitty, and Daisy, his sister.
Daisy died today about 4 pm of kidney failure. She had been on a IV drip for three days at Adler's Clinic in Reseda. She went downhill from the moment we took her in. We took her home last night because she looked so miserable in the vet's cage. She stayed with us for 18 hours and then died peacefully. She never went into a coma. I wish we had done that with Gracie, who was sinking away peacefully, but she died in a cage at Adlers', and not at home.
Daisy had a grade II/IV heart murmur most of her life and possibly died from a heart attack.
.
This is the third cat of ours to die in 20 months at Adler's Clinic: Gopi, Gracie and now Daisy. All three had been on IV fluids.
.
Unfortunately there are always stray cats out there that need loving owners, so we have had no difficulty finding "replacements."
.
We can never "replace" any of them, but there are a lot of needy kitties out there.
.
Her brother and Kali are saying their goodbyes.
.
Life sucks.

My heart goes out to you.

Sorry for the loss and sorry her sibling, Dustin has cancer.

I'm a bit confused, did Daisy die of kidney failure or a heart attack?

She was dying of kidney failure and I assume the end may have come from a heart attack because of her heart murmer, or congestive heart failure--whatever; I am no vet.

I lost my Shimmer Sunday of unknown causes at the vet's office. He had kidney failure, IBD, and an abcess or possibly cancer, take your pick which he died from. It never gets easier.