Vietnam: With Rabies Deaths on the Rise, a Menu Item Gets a Closer Look 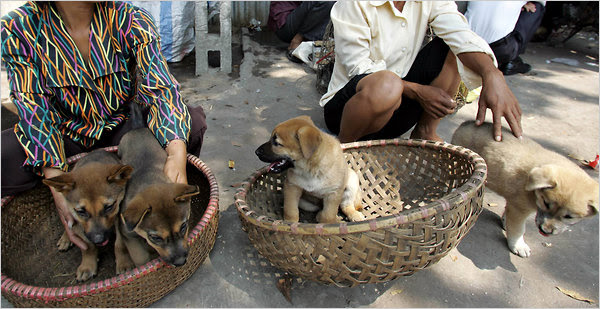 But subscribers to ProMED, a disease-outbreak Web site, have pointed out another contributing factor: in the mountainous rural northern provinces where the problem is worst, many people are fond of eating dogs.
Most rabies is transmitted by bites from stray dogs. The disease kills about 55,000 people a year around the world, mostly children under 15, according to theWorld Health Organization.
In parts of Vietnam, according to the national government, only one dog out of 25 is vaccinated, and there is a regular cross-country trade in dogs for the table. (Raising dogs for meat is popular in many countries, especially in southeast Asia and West Africa.)
A study in the journal PLoS Medicine last year described the deaths of two rabies patients in Vietnamese hospitals. Neither had been bitten, but one had cut up and cooked a dog killed in a traffic accident, while the other had eaten a sick cat.
Many Vietnamese refuse to eat vaccinated dogs, said Merritt Clifton, editor of Animal People, an animal protection magazine, because the only vaccines locally available are grown in sheep brains using an outdated method invented by Louis Pasteur. If improperly stored, those vaccines can give rabies to the dog, and in turn to the diner.