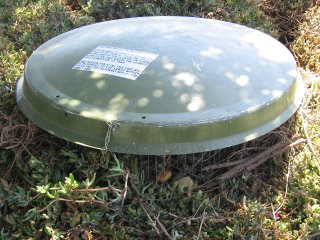 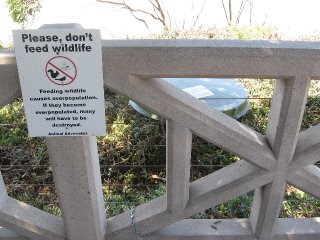 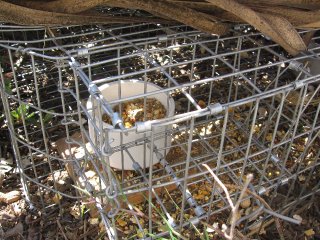 I was in Palisades Park today

The burrow count and visible squirrel count was way down in the two block area that had 95% of the squirrels. I saw zero ground and tree squirrels. The holes had trash, dirt, branches in them and lots of mud. It looks like someone flooded the burrows, or, more likely, tamped the burrows shut after gassing them. It is impossible to trap and kill every squirrel in an area.

Maybe he used his famous “Rodenator for Hire” burn them to death method. This is his signature means of killing.

There are six traps in the park today all in one spot. They are located at Ocean and Palisades on the Western side of the fence. They are clearly visible.

The squirrel trap is 2'x2' wire mesh with 3' round diameter metal lid. The others look like standard over the counter poison bait stations.

The squirrel trap doors are in open/locked position. He is either pre-baiting or he may be using this as a poison bait station. Squirrels were entering and leaving the traps including tree squirrels.

Well, I'll find out more when I see the contracts and do a little more snooping in the park.

Maybe Ayers thought he should make $6,500 a week and gave his trapping efforts a Rodenator boost so he could get out more quickly.