Well, well, what have we here, Obama the phony? 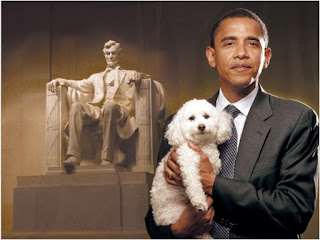 This article ran when Obama was running for Pres. in June 2008.

Senator Obama doesn’t currently have pets, but holding Baby, he looks like a natural. Baby is the focus of a recent book called “A Rare Breed of Love” by Jana Kohl, which focuses on the poodle that suffered a horrific decade of abuse in a northern California puppy mill.

Obama, in his response to a questionnaire from the Humane Society Legislative Fund, indicated his support for reforms to crack down on puppy mills, close loopholes that allow many puppy mills to escape federal regulation, and provide better enforcement of the Animal Welfare Act. The senator also supports legislation led by fellow Illinois Senator Dick Durbin to stop the imports of young puppies from foreign puppy mills -- puppies from China, Russia, and Mexico who are shipped at just weeks old, exposed to extreme temperatures in airplane cargo holds and sometimes arriving in this country sick or dead.

"Kohl says (of Obama), "It was so evident this was an extraordinary human being." Kohl says he was very distressed at what she told him about puppy mills and Baby's plight, and showed a lot of compassion. "He's a mensch," she adds.”

“Obama posed with Baby in front of the Lincoln Memorial in -- a fitting backdrop, says Kohl, because was an animal lover.”

Read the article that author wrote about Obama getting Bo. She really gives it to him. Obama used the animal community to garner votes. I did not donate to his campaign until I heard him promise to adopt a shelter pet, then I donated. I want my money back, seriously. I feel he broke a promise to me. He reminds me of Villaraigosa. At least he's smarter and doesn't stutter.

Obama should have adopted that poodle right there. She is hypoallergenic, was a puppy mill survivor and only had three legs. That would have made tons of people go and adopt a pet from a shelter. We could have emptied the shelters and saved billions of dollars. But no, he had to accept the hyperactive puppy PWD from the Kennedy's. Obama can't even see how wrong of a decision he made. He's just a politician. I really had hoped for change. I guess I should just be happy that he's not a total embarrassment like Bush.