The two charts below, prepared by Brad Jensen at http://sheltertrak.com, show 2.5 years of "progress" by LAAS in terms of saving versus killing of cats. In 2.5 years the killing percentage has decreased 2%, and the overall Live-Save Rate has increased from 37% to 42%. That is, there has been an increase in live saves as a rate at about 2% per year. In another 22 years we will be at No-Kill (90% save rate). But because of the huge increase in impounds, the current 58% kill rate (euth + Died In Shelter) means 3,000 more cats were killed versus when the kill rate was 63%.
This is what the gradual approach has accomplished. I don't know why anyone thinks much will improve unless there is a massive shakeup at LAAS.
The category "Other" is basically those who died in the shelter from disease or injury, or who were DOA. But because of the huge in 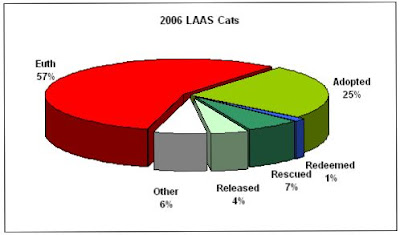 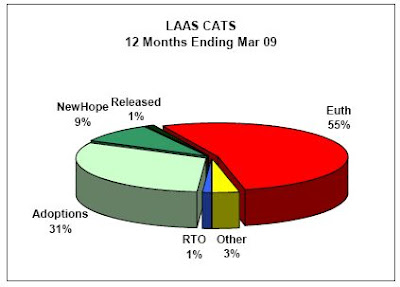