Barth Refuses to Respond to Request About the ACTF and LAAS 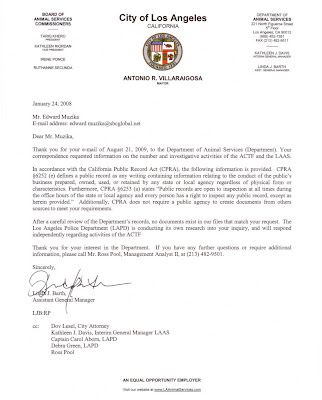 47 days ago, I sent a Request for Public Records to Barth, Davis, Captain Aborn and Trutanich requesting information about the Task Force's and LAAS's activities regarding complaints of residents that have too many cats.


During the two weeks before I sent this request, I had received calls from three people who were visited by either LAAS or the ACTF because of complaints about too many cats. I had also talked previously with Office Ramon Muniz on the ACTF who said people with too many cats, and feral cat colonies were the ACTF's biggest problems.


See, I had thought that the ACTF was formed to stop animal abuse and cruelty, such as dog fighting, or people torturing or abusing animals, not as the principal enforcer of LA's Kennel Law, 53.50. But apparently it is a lot easier to enforce the kennel law than find cases of cruelty. It also appears that both the ACTF and the LAAS may be manufacturing complaints against certain selected targets such as Ron Mason and Marc Madow.


I might note that this sort of activity appears to have increased since Trutanich has become City Attorney.


Here are the eight questions I asked:

Finally, today, October 8, 47 days after submitting the request Linda Barth responds by saying they have no records relevant to any of these questions. They have no activity logs, no log books, no log of complaints, no log of investigations, and if they do, she is not telling me where that information can be found.

This is a total screw you response that she could have prepared on day two of the request rather than day 47.

Barth's refusal to supply this information or even where it can be found appears to validate my complaint that far too much time, money and energy of both the ACTF and LAAS is spent chasing after people with more than three cats or dogs. Why? Because this is an easily enforceable law as opposed to finding real animal cruelty and abuse.

A few weeks ago Marc Madow was visited by a supervisor of LAAS. This supervisor went out of his way to distance himself from the anti-cat activities of the ACTF.

What is going on here? Has Trutanich become complicit is a law and order campaign against people with too many pets?

Why would you expect a city department to provide anything to a psychotic terrorist?
Why would they give anything that could be used as a weapon to an insane terrorist? Real people with real jobs have real work to do. They don't have time to try to figure out if there is any significant question in all the insane ramblings you call "eight questions." They cannot answer rhetorical questions. Trying to figure out what kind of "begging-the-question" argument is embedded in #7 would take a real long time.

They certainly don't want to interfere with an ongoing investigation of terrorists.

Why would I expect a response? Because it is the law. The City is supposed to respond according to the exact law she is quoting. I quote that law further:

(1) Assist the member of the public to identify records and information that are responsive to the request or to the purpose of the request, if stated.

(2) Describe the information technology and physical location in which the records exist.

(3) Provide suggestions for overcoming any practical basis for denying access to the records or information sought.

HA!! #2. You seriously believe that any citizen of the US who wants to know the business of how our government is being run should be labeled a psychotic terrorist?

Linda Barth is a gem isn't she? Besides the obvious obstruction of justice, she manages to respond to Ed's letter of August 21, 2009 with her own letter dated January 24th, 2008. These people not only appear to not know what time it is, but also seem to not know what month or year it is. Is this the type of character we want acting as custodian of records?

For Barth to say she has no records or documents matching Ed's request and then fails to provide any guidance to find answers to his questions is like saying, I really don't know what 5 of our Department's employees are actually doing.

So, if Linda doesn't know, would Kathy Davis know? And if she doesn't know then who's really running this show anyway?

PS - Makes it seem like she knew ahead of time. Now that's a scary thought.

What I find most remarkable is the utter contempt she is displaying for the public records act. Just we "we don't have any records" is a slap in the face.

I am surprised Barth responded at all to you. Normally she ignores all attempts to get information.

Could be both. Without any official info, but with personal knowledge of lots of people being visited by either ACTF or LAAS over the last 2 years, there is prima facie evidence that they are wasting a lot of time and money enforcing the kennel law.

They use it to resolve neighborhood disputes, neighbor complaints, and build performance stats.

Remember, Officer Muniz, member of ACTF, and who again recently visited Ron Mason, said large feral colonies and people with too many cats are the ACTF's biggest problem.

My request was directed to verify his truthfulness.

You are all Sanpaku!
No information for YOU!
Ask again in two weeks time.

p.s.: "Words, as is well known, are the great foes of reality."
--Joseph Conrad

Officer Muniz raided Ron Mason recently? I thought the raid happened over a year ago. Mason was raided again? But why? They took all of his cats except for three of them right? Why was he raided again?

Why did Muniz go after Mason if Mason was forced to cut down to the legal limit? Three, four, five?

Ron Mason was visited, not raided by Muniz. They did not get all of Ron's cats when they raided. Someone had reported that Ron had 50 cats. Muniz found no indication of anywhere near that many but did complain about Ron's bachelor housekeeping. I am sure they will be back.