Best Buy’s War Against Jimmy and One Feral Cat; BOYCOTT 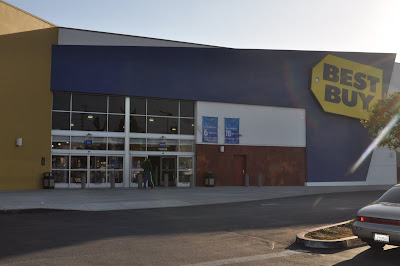 
Jimmy is still living in his tent with four cats behind Best Buy at 19350 Nordhoff, at Tampa and Nordhoff in Northridge, awaiting a November 6 court date. Jimmy has been living there for over two years until Best Buy and three other stores took over the bankrupt Levitz building. For a full story on Jimmy, see Patrick McDonald's July 30 article in the LA Weekly: http://www.laweekly.com/2009-07-30/news/jimmy-on-the-edge-of-town/1


But Jimmy won’t move because he can’t get anyone to feed the all the seven colonies he feeds in the area, a total of about 30 cats. He’d rather risk the outcome of a trial and jail.

Unfortunately the Nordhoff Plaza security staff has stepped up its harassing activities against Jimmy by roughing him up one night. He filed a complaint against them at the police station, after which security stepped up their harassment even more. (Since this was posted, the security company head guy apologized to Jimmy saying they were responding to pressure from management. Jimmy dropped charges.)

Jimmy cares for several cats on the bridge that had been cared for by Monica before Jimmy moved there. Monica still comes by and gives Jimmy cat food and supplies as do other people. Last week, Monica was stopped by the guards and told she could not come into the Best Buy parking lot unless she were shopping there. This to me indicates again that the guards are responding to Best Buy's complaints. She had to park on and walk the load of food and supplies a considerable distance to Jimmy’s tent.

Best Buy’s management denies they ever complained and blame it on the management company, claiming they have no control over the guards, yet months ago, one of the guards told Jimmy that Best Buy was upset because one of the feral cats Jimmy feeds comes into their three story parking structure. (Photo 3)

However, now at night, security shuts off access to Jimmy’s tent and that cat with yellow police-style tape. (Photo 4) When guards see Jimmy feeding the cat, they grab the food and throw it into the flood control channel right in front of him. (As stated above, the security company backed off and they no longer do this.) 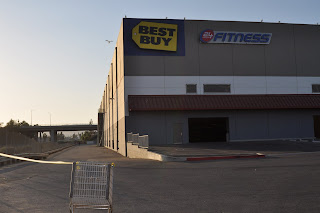 So it is not the County after Jimmy or even the railroad, but according to the guard, and a reporter who talked to Jimmy, it is Best Buy’s management.

I talked to two managers at Best Buy. The second, the operations manager Dooreen said she doubted Best Buy ever complained to anyone about Jimmy. 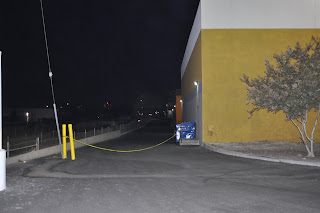 However, I asked her whether sales had been down over the past three months as it is all over the Internet that best Buy was the source of harassing Jimmy. She did not respond. I told Doreen as the principal anchor at the shopping center, that Best Buy could stop Jimmy’s harassment with a single phone call to the management company and the security guards. She just told me to call the General Manager who would be in the store Thursday, October 15. I did, but he did not return my call.

Take a look yourself. Go there after the stores close and see the yellow tape blocking Jimmy’s access to his tent.

This cat has not been fed in 6 days. (The cat is now being fed.) 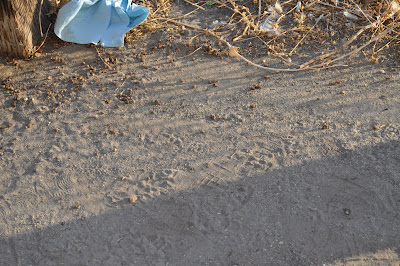 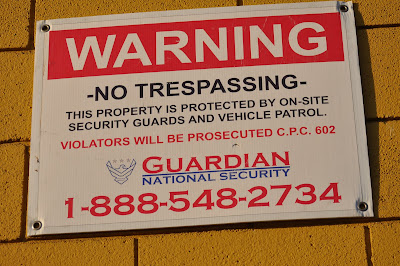 Tell Best Buy's General Manager or Doreen that one phone call to the management company, and one word to the Guardian National Guards, and Jimmy would be left alone. In fact, I am sure if they called the City Attorney Atteukennian, he would drop charges against Jimmy. Tell them otherwise you will boycott THEIR Best Buy store.

Go around to the back of the building next to Bed, and Beyond and talk to Jimmy for yourself. Hear his story.

wow. we have a jersey mikes here in OC.. i'll voice my outrage with them as well, since they are all connected.

I'll put a phone call into BB too.. those idiots.

keep up the fight jimmy!

It's enough torment that Jimmy's tent has a hole in it and he is going to get soaked in this rainy weather. He's being tormented by those asshole people who care nothing for human life or those beautiful cats who are being cared for by someone who actually has no money, but wonderful ethics!

How in the hell are they going to survive if Jimmy can't even get to his tent and the tormentors are starving the cats to death by destroying the food!

This is psychological and physical torture.

I WILL NEVER SET FOOT IN THAT ASSHOLE place again and will never go to that damned Citybank at that intersection, EVER!

They need to lay off that man and those innocent cats!

HEY YOU NASTY BASTARD WHERE ARE MY POSTS YOU ROTTEN FUCKER

Somebody really doesn't like this boycott and has sent several threatening comments. The comment immediately above is representative. Perhaps this is someone from Jersey Mikes or Best Buy maybe?

PROVIDE FOR HIM, or LEAVE HIM ALONE! said...

Excuse me??!! WHO, may I ask, is the nasty bastard? Bunch of psycho anti-human, undignified cat killers! You have no conscience and no integrity.

Animal and people haters! Abhorers of the innocent, the helpless, the voiceless, and destitute!

I hope you find yourself groveling on the street with no shelter, no food, and freezing cold, drenched in the rain, with nowhere to go, and people coming over to you to laugh in your face everytime you try to go home to your little corner of the world without as much as even a bite to eat.

I hope crows come over to take the food right out of your hand when you are starving and sick, with no one to as much as even look at you in the face for fear that they can see themselves in the mirror.

I hope someday you end up on the street in the freezing cold rain and have to dive into the LA River and have to hunt for food at the bottom because somebody has maliciously dumped the only food a kind person has handed to you, so that you would be sure not to have anything to eat. Where are the submarines now?!

STOP KILLING THOSE CATS AND LEAVE THAT POOR MAN ALONE!

No, why don't YOU find him "...A WARM, DRY, PlACE FOR HIM AND HIS CATS TO SLEEP..." and keep him and his fleas out of my sub sandwiches.

There were no fleas when I visited Jimmy and took some food for him. Everything was clean.

Last two posters are accusing the fleas on the cats and on feral cat people. This is obviously the same poster and he is lying.

There are no fleas there, and real cat people don't allow their cats or homes to become flea infested.

The only infestation is inside this person's brain and heart. Therein lies the filth.

My heart goes out to the poorest of the poor.