JIMMY HAS PROBLEMS IN SACRAMENTO!!! 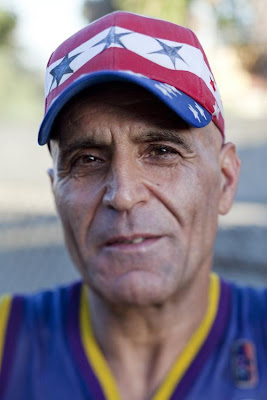 Jimmy Nasralla, the homeless man living in Northridge, moved to Sacramento last Saturday to take a job at an Indian/Pakistani restaurant run by a family of Muslims. They took him to their mosque the first night he was there. The owner had told Jimmy he could bring 3 cats. Jimmy brought 1, Meena, a female, who had lived with Jimmy in his tent.


Apparently either the owner, Mohammed changed his mind or had a different idea about the cats' living status. Jason, one of Jimmy's friends, talked to Mohammed on Thursday.

Apparently Mohammed was fed up with Meena living in the same room as Jimmy, complaining the cat was incompatible with the restaurant, even though Jimmy's room is quite far from the restaurant. When Jimmy was away on an errand, the owner let Meena out of Jimmy's room where she had lived with Jimmy for only five days, and Meena immediately ran away.


Jimmy, furious when he retrurned, told the owner he was moving back to LA. Jimmy spent the entire night looking for Meena with no success, but did find her the next night after searching all day.


The owner refused to let Jimmy keep Meena in the room with him, and said she could stay as long as she was kept in a carrier outside Jimmy's door. Jimmy said it got freakishly cold at night and he brought her in anyway. Jimmy is trying to negotiate with the owner to let Meena stay in the room with him.

I just heard from Jimmy a few hours ago. The owner told Jimmy, "Just throw the cat away!"


This is intolerable. Jimmy was lied to and the cat is considered garbage by this Muslim restaurant owner. Apparently he does not know that in America we keep our cats indoors--or should.

We are now trying to arrange transportation back to LA. Hopefully we can make other living arrangements when he returns.

Wasn't Jimmy's cat from a feral cat colony ? Hellloooo Sac is not cold and when you guys really believe it's wrong to keep cats outdoors, you will knock off the TNR nut stuff. Cats belong indoors, I have 5 they live in the house. Make up your minds. Are thre " special " cats that deserver to live inside, while others (45 ) live by the train track?

Who does this kind of remark come from? Meena lived with Jimmy in his tent in Northridge. Both were homeless. The other 45 cats Jimmy took care of were in feral colonies. The owner said he could bring 3. If Jimmy did not leave his tent by the 17th he’d go to jail by court order.
The cat was taken to Sacramento to a strange and new environment, and the owner shooshed Meena out of Jimmy's room when he was away the fourth of fifth day the cat was in his new environment in Sacramento. The temperature was 50 degrees last night there.

All cats should be indoor. The other 45 should be too. But we are faced with a situation where the owner wants Jimmy to "Throw her away" in a strange town where he has no means to bring himself and Meena back at this moment.

Therefore I don't understand your sarcastic and self-righteous remark Karen. With five indoor owned cats you are breaking the law in Los Angeles and could have two confiscated and killed. That is why we need to increase the cat limit and more caretakers could bring more cats home.

Ed, I wasn't trying to be sarcastic. Every cat taken from a shelter for a colony is " dumped" in a strange unknown place. I agree the cat should be crated in the room until it knows where home is. but Jimmy abandoned 45 cats, so he carries some guilt for them. That is the trouble with caretakers, they stop.

Of course he feels guilty, but he was thinking of suicide himself where he was.

AND, those cats have not been abandoned. I've taken on 4 of Jimmy's colonies, and others, the other five. We are now also working on trapping and S/N the remainder.

Apparently your solution is to kill them and not let them suffer. In a strange sense I can almost see your point. But there are over a million homeless cats on the streets of LA, and I, for one, am fighting for their lives and for sensible changes in the law and animal services policies to end cat homelessness. One such change I have proposed is lifting the legal limit of cat ownership from 3 to 10 in Los Angeles. In San Diego, they have no limits on cat ownership and in Santa Monica, no limit on the number of indoor cats.

If this were the case, many of us would have many more cats. Almost all of the cats I have owned over the last 15 years came off the streets. Unfortunately, those who I have taken off the streets have not lived long. They all died all too quickly from cancer or kidney failure. Gopi, Daisy, mama 1, mama 2, Mr. Gray. When one dies I can take another off the street.

Wow...do nasty mean people just grown on palm trees here? L.A. has more cat rescue orgs and individuals than you can count and JIMMY SHOULD BEAR GUILT? For what? Trying to stay out of jail? If he'd gone to jail would be also be guilty of abandoning the cats?

Hey Karen, why don't you go live in a tent and take care of those cats? Where were you the whole time Jimmy was risking everything to stay there and care for them?

The idea that Jimmy has to trek to Sacramento for kitchen job is horrible. Are there no cat friendly people up there who can let Jimmy have a place to stay with his cat, while he earns some money. This world makes me more disgusted every day and people who would fault Jimmy for any of this make me puke.

Karen, you apparently do not understand how TNR works. Feral cat caretakers do not take cats from shelters and add them to outdoor colonies. The cats are already living outdoors, and most of them are unsocialized and not adoptable because they were born on the streets. The cats are sterilized and returned to the area where they have already been living. While TNR is not perfect, it stops the breeding and allows the animals to live out their lives, albeit imperfectly, just like all other wild animals. In the best of all possible worlds, yes, all cats would be indoors and loved and cared for. Unfortunately, we don't live in that world. I'm sure Jimmy does have some guilt, but as a homeless person with no resources, how was he supposed to bring all 45 cats with with him to Sacramento? It would have been great if there were people willing to foster and tame all those cats for adoption, but that is not realistic. Sounds like others have stepped up to the plate to help his colonies. Good for them. What is your problem with that?

One of the best things about Ed's blog is his willingness to post things even if he disagrees. By the way Red Rock is not Reno, the IP shows as Reno.

Sory you feel like puking Jeff, maybe you have the flu, or drink to much Kool-Aid ?

The fact that your poor little kitties passed so quickly Ed, bespeaks of their poor health & pain while living as ferals. Our local shelter has over 600 cats that they will admit to. It is a cat sanctuary, not a shelter. It has lost it's way and hurts, rather than helps.

We are on a ten acre parcel and I work in real estate. When I find an abandoned cat or dog inside the house I bring it home. Year to date my family and I have altered and placed over 68 animals. We don't take them the Humane Society to rot with the other 600 cats and almost 200 dogs.
If the animal is found on the exterior of the parcel it goes to the animal control center to be processed as a stray.

I appreciate your love for the cats Ed, I disagree with the soluton. The unintended consequences are many. Just cleaned up a propety after a caretaker.feeder/hoarder, depending on which neighbor grabs your ear first, moved out nd left them behind. Please google " nobody wants to say no to an animal" good story.

Karen you seem to be an especially crotchety person. All that you have offered is criticism of your local humane society, TNR in general, TNR people like me, Jimmy, and offerred nothing positive about anyone except yourself. I can imagine you have a lot of friends don't you.

You also did not offer a solution for the one million homeless and feral cats on the streets of LA.

Usually those who oppose TNR offer as a solution, trap and kill to put them out of their misery.

In LA if you have more than three cats, and a neighbor complains, the City can and have confiscated the cats, impounded them and killed them.

So angry one, what is your solution?

My solution is alter your animal if you are a private owner. Be more selective about your adoption practices if you are a releasing agency. Putting animals brought in by their owners for euthanasia up for adoption by homeless people is not a solution. Telling people who have lost their homes that you an take there litter of kittens, but they will be killed in three days, is not a solution. I just received a call from a person in foreclosure to lt me know there would be a littr of kittens in the basement. Angry ? you bet your butt!