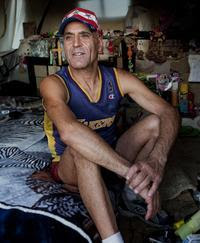 This is the cover story of tomorrow's LA Weekly. It gives Jimmy's story of life in a tent behind Bed Bath and Beyond and the railroad job given to him by the City Attorney's Office, Greig Smith's Office, and the Union Pacific Railroad, all who thought of Jimmy as the homeless guy who could be pushed around.

Jimmy is still living behind Bed Bath and Beyond and we go to court on Monday to see how the City Attorney, the courts and Councilmember Smith deal with this case. If you ar interested in coming on Monday, I'll give you time and directions.

Please read and leave comments for Greig Smith, the City Attorney, The local CA, Aprahem Atteukenian to see. This is the only way they change and will leave Jimmy alone.
JIMMY ON THE EDGE OF TOWN
A Homeless Christian-Muslim From Palestine Pitches a Tent Behind Bed Bath & Beyond in Northridge. Then Come the Railroad Men and Feral Cat Activists fight back.
BY PATRICK RANGE MCDONALD
Published on July 29, 2009 at 1:26pm
Photos by Ted Soqui
At a feral cat feeding stop at Chase Avenue in Northridge Seven days after his court hearing for trespassing on railroad property, Naser Nasralla, a Palestinian immigrant from Jordan known as “Jimmy” by his friends, is once again feeding the stray, skinny cats that roam his neighborhood in Northridge, a tree-lined Los Angeles suburb in the San Fernando Valley made famous by a devastating 1994 earthquake.

“Cats have no reason to be hungry,” explains Jimmy, who speaks fluent English. “Cats love life like people do.”

Only a few hours ago, just as the hot sun was setting for the night, Jimmy sat inside his tent near a lonely stretch of railroad tracks and listened to KNX 1070 — a news station that’s always blaring from his small, transistor radio — for the latest developments about Michael Jackson’s death. They were both born in 1958.

“It was too sad,” he says about Jackson’s memorial service. “It almost made me cry.”

But now, in the cool darkness, his confusing legal troubles and the passing of a favorite pop star are behind him. Jimmy, a wiry and soft-spoken man who bicycles around Los Angeles to stay fit, happily tends to his cats.

Jimmy usually walks his red mountain bike, loaded with three or four small, plastic bags of cat food, along the main thoroughfares and back streets of Northridge — a cat-feeding chore that takes six or seven hours to complete. But on this night, he’s asked me to drive him around his suburban haunts.

Jimmy sits in the passenger’s seat of my silver Chevy HHR still dressed in the light clothes he wore during the day: blue mesh gym shorts; gray running sneakers; gray “USA” socks that come up slightly over his ankles; and a tight-fitting, purple, L.A. Lakers jersey with an “8” on the back — Kobe Bryant’s number. He wears on top of his shaved head a baseball cap designed with the stars and stripes of the American flag. Around his neck, hangs a necklace he designed and never takes off: a gold-plated chain with a crucifix and green shamrock that are fused together with Krazy Glue.

“I mix the good luck with the religious,” Jimmy explains.

After one stop, sometime around 10 p.m., we return to the car and I decide to turn on the car stereo. Bruce Springsteen’s album Darkness on the Edge of Town just happens to be in the CD player. As the song “Badlands” takes off, Jimmy stares straight ahead, listening intently. He likes Springsteen.

“Lights out tonight/Trouble in the heartland/ Got a head-on collision/Smashin’ in my guts, man/ I’m caught in a crossfire/That I don’t understand ...”

Soon after the song ends, Jimmy appears shocked and disappointed.

He’s inquisitive on the little stuff in life, but for now much bigger questions loom about his own circumstances as a homeless and unemployed man in a complex legal fight with the city of Los Angeles and the Union Pacific Railroad company, who want to kick him out of his makeshift home.

“Badlands, you gotta live it every day/ Let the broken hearts stand/ As the price you’ve gotta pay ...”

As you drive north on Tampa Avenue, toward a giant mall called the Northridge Fashion Center and the sun-scorched hills of the Santa Susana mountain range, the strip malls and shopping centers change from mom-and-pop businesses, like the Tampa Market and J & J Liquor to shiny, corporate-chain stores such as Costco and Bed Bath & Beyond, located a half block south of Nordhoff Avenue. That avenue has been a longtime demarcation between the affluent and not-so-affluent in Northridge. Jimmy lives behind Bed Bath & Beyond in the slightly more blue-collar part of the community. His neighborhood, though, looks and feels as if it’s going through an upgrade.

On another 90-degree-plus day, KNX 1070 blares from his transistor. Jimmy says that he’s already fed the seagulls and pigeons — something he does twice a day. He turns off the news and offers me cookies and fruit juice, which, as a self-described vegetarian, are his daily staples. It’s also an economical diet — Jimmy receives a monthly welfare check of $220 and a monthly food-stamps stipend of $200. “That’s what I’m living on until I find a job,” he says.

Jimmy then grabs a green plastic chair so I can stay out of the sun and sit with him inside the tent that he bought at a local Target for $130. A gray tarp spreads over the tent, which reflects the harsh brunt of the Valley’s intense summertime sun and gives him some relief. The odd little piece of land he has selected is cement in every direction, and situated close to a railroad spur used to supply goods to local businesses. There are no trees nearby to provide him shade.

Nice photo of you and Jimmy. Patrick did an excellent job of writing the article. I hope this will be a major Malox moment for the City Attorney who is handling the case, the Railroad and the rest of the lynch mob. Maybe the prosecution will fold up their tent and dismiss the case on Monday. This is some good ink for Jimmy. He should receive a lot of empathy from all over the map. Good show!

Ditto, #1. Wish I could be there for Jimmy... (got my cats and chemo treatments for my husband---issues.)

Bless you for driving him around to all his feeding sites. Wonder how he gets 7 hours worth of feeding spayed and neutered.

Very Tough job emotionally, physically, on your own, and on your bike. My prayers are with you, with Jimmy, and the colonies of cats he is feeding at all the different locations.

Rugged individualists like Jimmy scare government-types because he doesn't need them. Jimmy lives free compared to the people who committed perjury getting a stated income mortgage that they are now finding impossible to pay. He doesn't need public housing. He doesn't live on credit granted by banks. He doesn't ask permission to have a close relationship with feral cats. What does he need from the dog catcher? Absolutely nothing is the answer. Jimmy shows pathways to freedom which scares the daylight out of those who seek to control us all. Even Jimmy's religious values threaten the divide and conquor system we live under as his Christian and Muslim values get along just fine within the same body. Peaceful, smiling, happy, easy going Jimmy and his cats are bad news for those who want us to goose-step to the we need government mantra. It's the government who should fold up some of their tents and go away not Jimmy.

your blog is nice

Gave Jimmy lots of boxes of outdated crackers I found at Costco (for the seagulls). Poor guy, he says they eat so much: cat food, mostly catfood. I was worried about the seagulls at Costco and would feed them when i would see them, but lately I haven't seen the seagulls. Jimmy is caring for them....all lined up at the top of the building next to where Jimmy has his wonderful home set up. It's so nice and clean; the cats are nice and clean; clean litter box he's got for them there. It looks like a beach resort, until the train passes by...so scary just a few feet away from him and his cats. That gray and white one is a DOLL!!!!!!!!!!!!! I just picked her up and kissed her and kissed and kissed her; kissey-smooch, smoocheroos, YUMMMM! That cat is soooo precious!!!!!! Jimmy's tom cat just laying there...happy. I have no idea how he stays so clean. I didn't ask. Had my husband waiting in the car, and we had just swung around to Jimmy's after his chemo apt. just to drop off the boxes of crackers for his birds....So many of them. How are they ever going to survive now if Jimmy is evicted from that property! I am so worried for him and his cats! God, please help Jimmy and his cats. They need him. The houses he built for those little guys are so wonderful, so precious. The kitties are so happy. The place is just beautiful...so clean and tidy, and the cats so healthy. I lOVE that gray and white little girl! A total lap kitty and specialty smoocheroo.

This a sad, troubling story, not just for the human, Jimmy, but for the Feral Cats he tries to help.

Having lived indoors all my life I can't pretend to know what the cats are going thru, but having helped my Human try to rescue a Feral Kitten, once, I do know that aclimating them to an indoor, safe, existence, is not always an easy task, and is sometimes impossible.

I've blogged Jimmy's story, and have checked out your blog, and will add it to my Blogroll of Cat Related sites, and blogs.