MAYEDA's KILL RATE IN 2006 COMPARED TO THE CITY

The 4% "Other" is a category mostly of animal that died in the shelter from illness or injury. The actual total kill rate for Mayeda's shelters was actually 82% for cats. Of every 100 cats that came in, 18 left alive.
I am not aware of any large system anywhere in the United States that is so bad.
By contrast, the pie chart for Los Angeles (City) Animal Services, not considered at all near the top of the success list, shows: 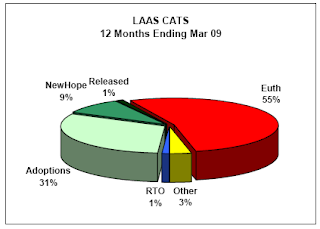 The total kill rate for both euthanasia and died in the shelter is 58%, 24% less than Mayeda's kill machine.
How can County government support such poor performance? The citizens of Los Angeles City have gotten rid of a shelter manager who does twice as well as Mayeda. What on earth is wrong with the County Supervisors?

And no wonder. This was posted on Craigs List today by someone who went to the county shelters trying to adopt.

I went down to the Downey and Baldwin Park Shelters today. I adopted a cat at Downey and two kittens at Baldwin Park (which I will foster until I find a homes for). I found both place ridiculously incompetant.
At Downey I asked numerous people which cats were red-listed and scheduled to be euthanized next. They all treated it like it was the strangest question ever asked and each said a different thing. I spent so much time going from the kennels to the office where I would have to wait for my number to be called. They told me a tuxedo kitten would be killed on Monday - I took the number to the front and they said it had already been adopted. They told me a sweet Tortie would be killed on Monday - and then said someone had a hold on it. One guy told me a bunch would be killed Monday. Another guys said none of the kittens were being killed and people posting stuff were just making stuff up. These people are so full of s**t, and animals are dying right and left.
While there are some nice people working at some of these county shelter, the overall atmosphere is of total indifference. At both Downey and Baldwin Park all the paperwork on the animals is on the inside of a perimeter of cages in an employees-only section. You can't get any info. unless you beg the people (who are sometimes inside) to give you info. It is so ridiculous. I ended up bailing out 2 sick kittens at Baldwin Park because I knew they'd be killed. I tried to take out a whole litter with the mom (because they only have 5 days - and aren't old enough to be adopted without her) and they said it would be $360, which I couldn't do. These people make it so difficult for you to even try and help these animals.
So I'm trying to do my part with have one adult and 2 babies. I'll get them healthy and ready to place. Maybe that will be 3 less fatalities in this utterly f.***ed-up system.

Board of Supervisors: Fire Mayeda said...

In answer to the question about why the Supervisors don't care about Mayeda's abysmal, inhumane performance, I can only suggest that we all call our Supervisor's office and experience their attitude ourselves.

After Ryan Olshan published the latest round of 13 pictures of very clearly sick (and in one case, dead) cats at the Lancaster shelter, I called Zev Yaroslavsky's office. Having dealt last year with Yaroslavsky's aide in charge of the County system, Maria Chong-Castillo, a woman who does not even slightly try to hide her disdain for Yaroslavsky's constituents, and who manifestly does not know or care about even the most egregious abuses in County shelters (when I spoke to her last year it was about the incident of County employee Felix Reyes dragging a dog with a dislocated hip through the grounds of the Baldwin Park shelter, as well as the death of Zephyr, the ten month-old puppy in Carson) I asked this time to speak to Yaroslavsky's Chief Deputy, Alisa Belinkoff Katz.

When I spoke to Katz last year she was actually polite, although her idea of being responsive to community outrage over Mayeda’s performance was to tell me, re Felix Reyes, that “The employee who committed this very inhumane act was disciplined and has been permanently re-assigned to a position in which he will have no contact with animals." Not fired, not prosecuted. Felix Reyes still takes home our tax money after being videotaped dragging a dog on the ground who had a dislocated hip – more than two years ago.

At that time, per the request of both Katz and her assistant, I emailed her the address of Olshan’s LACDACC watchdog blog, and she assured me that she would monitor the situation.

I called Katz this year about the pictures of dying cats in Lancaster and, almost a year down the line, seven and a half years into Mayeda’s demonstrably incompetent reign over LACDACC and Katz was unresponsive, hostile, and far more concerned about my lack of interest in dealing with Maria Chong-Castillo (I was not yelling, nor was I rude to Katz, I just said I was not interested in dealing with Chong-Castillo) and despite the fact that in June last year Katz had written to me “I'm sorry you had an unsatisfactory conversation with Maria Chong-Castillo and I do apologize if you feel she disrespected you in any way. It's always been our policy to handle each and every constituent inquiry with sensitivity, awareness of the issues and respect, and if we did not live up to that standard then I am indeed sorry.” Katz proceeded to deny that she had ever heard of Ryan Olshan’s blog, and then she hung up on me.

My Supervisor’s office, and his Chief Deputy hangs up on longtime constituents. Again, I was not rude to Katz, I simply said I did not want to be fobbed off on an aide who had been rude to me previously, who had demonstrated a complete lack of familiarity with the issues, and who had been contemptuous and dismissive of both my interest in making sure the County treats animals humanely, and my ability to understand what was going on at LACDACC.

When I called back and asked to speak to Yaroslavsky’s spokesman, Joel Bellman, I got similar treatment. Both he and Katz wanted to know why I wasn’t asking Mike Antonovich’s office about cat pictures in Lancaster; neither seemed to understand the concept that since Mayeda is the County system Director, it is Zev Yaroslavsky’s responsibility too. Neither Bellman nor Katz knew how long Mayeda had been there. Neither seemed to understand that this was a County-wide problem of long standing. Bellman told me that to understand why LACDACC was not a priority for the Supervisors “We can look at the budget.” According to Yaroslavsky’s spokesman, Joel Bellman, the fact that LACDACC only accounts for $31.1 million in the County budget (of which Mayeda makes over 190K) means that Zev Yaroslavsky cannot be bothered to make sure she and her crew are not abusing or neglecting L.A. County’s homeless animals.

But rest assured, he said, “we’re all animal lovers.”

They also don’t care about animals because animals can’t vote.