Like I said before, I don't think Ed should run a shelter program anywhere. I think he'd make an excellent head of any organization where animals' lives were not at stake. I would even write a good letter of recommendation for such a job.

This photofile was sent to me. Apparently, according to the sender, the "press release" on the right is what he is showing people in Bellingham, while the one on the left was the one actually released by the Department on June 29. I called the phone number on the allegedly fake press release and the number has nothing to do with animal services. CLICK ON PRESS RELEASE TO ENLARGE. 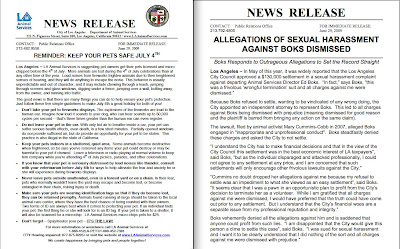 What a load of horse shit. I bet he faked a letter of recommendation from the Mayor too. The guy just rewrites history, literally

The phone number on the fake press release is Boks' cell phone. He wrote that ridiculous release himself. How do you spell "sociopath?" Ed Boks.

It's actually pretty funny if you've ever written a real press release (that got picked up). This reads like something out of the late, lamented "Weekly World News." Apparently Boks' defense against the charges is that Bat Boy can provide an alibi...

Also, can Bellingham officials not see that there's no LAAS department logo or City seal on Boks' release? Or can they not find the news article on the City-paid settlement to Mary Cummins published by the Daily News?

All of which kind of begs the question of why you, Ed, continue to act like Boks' complete lack of integrity would be just fine if animals aren't involved? Boks is a compulsive liar, a drunk, a harasser, and he fabricates every result he's ever achieved at every job he's ever had. Just because a guy owns a tie (or stole one) that doesn't make him a qualified executive. In Boks' case it makes him a tie rack.

"a tie rack" Good one! and so very true.

Boks forged that press release. No city logo, no dept logo, no dept address, his own cell number, no address at the bottom, no motto at the bottom. Plus, the lawsuit was dismissed as to Ed Boks "without prejudice." They can sue him again for the same thing. I would bet that was added so Boks would STFU with his lies. Didn't help.

It's pathetic that he has to do his own PR. He talks about himself in the third person, quoting himself. Delusional sociopath. I can't imagine him out there trying to get a job in the field in which he failed miserably. He brags about his "accomplishments" when all he really did was get himself and the cities he worked for sued a bunch of times.

How much do you want to bet that Boks will rescind his application for the job. He doesn't want to get rejected so he'll pretend he just got a better offer. "I wasn't fired, I resigned, I told them not to renew my contract." "I wasn't rejected for the job. I rescinded my application."

The lawsuit was actually settled in August. How can he say it was settled in June? Oh, because June 30 was his last legal day on the job. Such a fabricator!

The plaintiff in the case should sue for libel and defamation because of his "press release." Who cares if only a few old ladies in a tiny town in Washington read it.