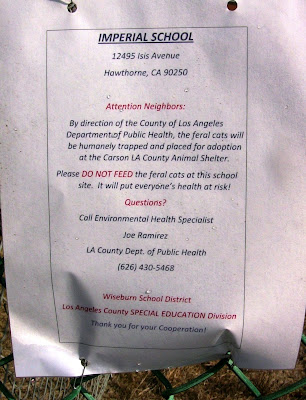 Trapping of feral cats has begun at DEL AIRE COUNTY PARK where a notice has been posted, that cats will be trapped and taken to the Carson shelter where they will be “adopted” out. Next in line for trapping is PECK PARK and THE HARBOR UCLA MEDICAL CENTER. Protests should be director to Dr. Fielding and the County Supervisors. That info is in my next post. Call Joe though and tell him how much we appreciate his lies about a national security risk and that the cats will be adopted.
The chart below shows that County killed 78% of all impounded cats, feral, friendly and kittens in 2006, with another 3-4% dying in the shelter (other). A feral cat has no chance at all. So Ramirez lies so no one will complain.
Notice that in 2006, 78% were killed at County and another 3-4% died in the shelter or were "lost." Of 35,817 cats impounded, only 5,508 wre adopted, or 15%. A feral cat has a 0% chance of being adopted. 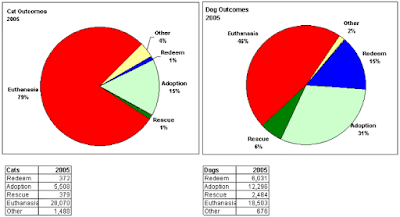 I spoke against this Ramirez at a Neighborhood Council meeting. He really wants to kill all of the feral cats. He spoke so long, I think everyone got bored but he is a Public Health official that does not know what is his talking about

(from animal records provide by LACDACC)