The below email was from Kay Thornberg stating Pasadena Humane's case. After that I posted a response from one of the rescuer witnesses. There is also a link to two new photos. However, if you click on the dumpster photo to enlarge it, you can plainly see the labels that come with new crates and that most of them look clean. There was no excuse to throw the stuff away. If they didn't need it, they could have stored it or given it back.
Dear All...I have looked into the PHS crate brouhaha and I want to offer some reassurance that these folks aren't all evil or sloppy. Here's what happened:

When they put out the call for crates for the animals threatened by the fire they were inundated with responses. A few crates were not usable because of rusted hardware, cracking and infestations of scorpions (ugh!) and spiders (ugh!). They made the decision that these items were unsafe and potentially unhealthy and those were the ones put in the dumpster. (Had they asked me personally they probably would have gotten the same kind of mess since my 4 crates sit in the garage, year-in, year-out, and do get rusty and dirty although not, I'm happy to report, infested with scorpions!!)
PHS people have stressed that they are grateful for all donations and could not have operated as professionally or efficiently as they did without them. Staff worked around the clock caring for 374 traumatized animals. They are upset at being vilified after protecting their animal charges from dirty/rusted crates. In an emergency like that one was/is it is often true that items can be 'brought back from the dead' but that takes hours of volunteer time and they did not have that time to spare in this instance. The rescue offered to replace any of the discarded crates if more were needed.
I also learned that the Facebook posting has been reported as fraudulent and, as of the arrival of that info yesterday there was a probability it (the posting) would be removed today.

Hope this info helps to clear up mis-information. 374 animals are happy about it. 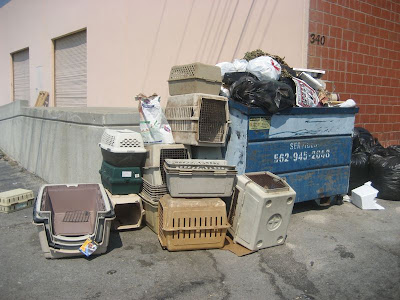 RESCUER:
They want to say my facebook posting is fraudulent? That's ridiculous! If they thought so, why didn't they contact me about it? Anyone can message or email me but no one has. If you read the caption you can see that I was merely sharing info on free carriers. I wasn't attacking Pasadena when I posted the pic.

I have some of those crates. I picked them up. Three were absolutely new. They were donated by Golden Retriever rescue. They put their phone number on them. They had new, clean pet beds inside of them. I called GR rescue and they told me they just bought those crates and donated them that morning. They also donated wire crates which Pasadena did use. I returned those three crates to GR rescue.

They were super mad that Pasadena threw them in the trash. They called up Pasadena who said they only threw away old, broken, dirty carriers. I will swear on a stack of bibles that the carriers were fine. There is one you can see in the pic that a puppy chewed on the corner of it. That's it. I would have taken that one if I could have fit it in my car. You can see a dog crate with a price tag on it. Some had a tiny bit of mud on the bottom on the underside from probably sitting outside. There were no scorpions! Plus, what's wrong with hosing, cleaning out the carriers? Do they throw away carriers after each use? If there were rust, it can be scrubbed off. There is no rust on the carriers I got.

There were bags full of clean, folded towels. I took those. There were new, clean blankets in there. I took those too. I asked people there if that was trash and I could take it and then said yes, so I took it.

Feel free to share my email. I can't believe they'd say my post was fraudulent and they're trying to get me in trouble with Facebook. What a load of horse shit.

I wasn't going to say anything about this but I'll mention it now. The baby squirrels I picked up from them were extremely dehydrated, emaciated and two were unconscious. They put 12 baby squirrels into a paper pet carrier. They told me they were all drinking Esbilac formula, another lie. They had dark poo which means mother's milk. Two had bad diarrhea. Four had not had anything to eat in days. If that's how they are going to treat wildlife, they should not take them in. I will now report them to Fish & Game. I'm also going to send them a cease and desist for sending this crap around calling me a liar.
ME:
After now years of dealing with self-serving shelters that lie about everything from stats, save rates, budget, rescue pertners, etc., I know who I believe. I know this rescuer, and the photo clearly speak for itself. The rescuer and friends have taken these discards and say they are from clean and excellent condition to new. Why can't Pasadena just admit an error? Will they allege the rescuer faked the photo?
For two additional photos showing only ten dogs when hundreds were claimed, look at:
http://www.facebook.com/photo.php?pid=3903875&id=733516211
I am amzed. I just checked my stats for this week. Almost 500 people visited this blog yesterday, and almost 400 already today regarding the Pasadena Humane posts.

I was sent a email soon after that pic was taken i think. It said to go to the dumpster and pick up free dog crates. When I got there, there were other small and medium sized crates. I took the big dog crates and my sister took the kitty crates. Wish I took a pic. They will tossing crates in the dumpster all day along with towels while rescuers were emptying it out. thanks for being wasteful schmucks, pasadena. No one should ever give them anything again. they lie.