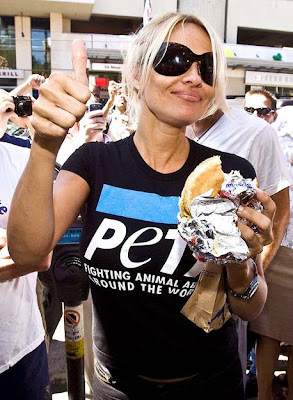 .
A lot of the non local posts I put up are from different news sources. A few minutes ago this was the top Yahoo story.

Do you think a dozen media would cover this KFC event if it weren't for Pam Anderson?

All goes to show you that you can be a celebrity and become president some day. As if McCain wishes more than 30 people came to his events.

In any event, KFC has launched a fake chicken sandwich. I really hope it works. McDonalds abandoned their veggieburger about eight months ago. The McDonalds I went to said they sold four a week--tops.

Burger King still sells them, but they are pretty bland.

The veggieburgers are also expensive vis a vis their low end burgers or chicken sandwiches. A low end Mac is a buck, while their veggieburger was $2.49 and it was the same basic sandwich with identical condiments and a tomato.

Chili's has a pretty good bean burger for seven bucks and a few Chinese restaurants make some vegetable dishes by just leaving out the meat, but they don't have a clue when it comes to vegetable entrees alone, like the Thai do.
.

Off to KFC to give them support on their new Veggie-Chcken Sandwich!

Sure wish China would adopt the same thing at all those restaurants where they have D-O-G on the menu.

If 150 restaurants can stop serving D-O-G while the Olympics are going on, why can't ALL of them do it permanently?!

How about serving Chinese D-O-G slaughterers, wholesalers, and and meat-packers for dinner instead?

If only everyboydy would flock to KFC for their New Veggie-Chicken for support then the new item could take off, darn it.

Anyone know Pam Anderson?--Get her to Mickey D's for support and renewal of Veggie Burger sales?

Packing that meat in those tight t-shirts in favor of animals sure gets the public to start looking at the issue doesn't it? HEEEEE!

BTW---You do know about the Vegetable Delight Restaurant in Chatsworth, don't you?

That restaurant has the most incredible entrees. Very reasonably priced too.

It's worth the travel. The flavors in their moo-shoo dishes and wheat gluten entrees are absolutely memorable!

I don't order anything that looks in the least like meat---they have a pork thing that looks to meaty for my eye-balls (same as Madeline's); however, they do have a ton of entrees on their menu that immitate meats but the meat doesn't look like meat, such as the Kung-Pao and the Fajita entrees for instance.

No Meat or Dairy on anything to worry about on their menu, not even in the ice cream!

The food is to die for. You would love it. They have a lunch menu too.

I agree about Vegetable Delight. Their relatives also run Garden Wok, same vegan food and menu, on Reseda Blvd by Oxnard St in Tarzana. I love their Won Ton Soup. YUMMY! And they have real crispy noodles which go great in the soup. The lemon chicken is great, too.

Why do you people eat "fake" meat? If one doesn't smoke cigarettes and abhors that lifestyle choice, would they sit around with a fake cigarette in their hands?

Hell, "we people" support any traditional meat chain that adds a veggie alternative for anyone to try.

I really don't intend to "sit around or hang out" at a KFC because they have a fake chicjen sandwich.

But it does mean that as I travel across the country, I have a larger base of fast-food places to go other than fries from McDonald's or a Veggie Delight from Subway.

It is a matter of giving choice and having increeased accessibility.